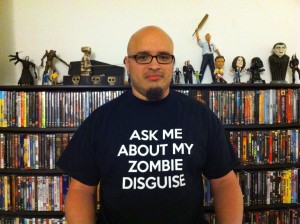 Born and raised in New York City, Vincent Viñas, has been forcing friends and family to read his writing for years. He did the same thing with his short films and whenever his old band played a show. His collaborative film efforts had the honor of bewildering unsuspecting theater-goers before midnight screenings of the cult classic, Donnie Darko. As a musician, Vincent was lucky enough to take the stage at the famed CBGB’s and considered trashing his drum set to spice things up. However, the drummer in the previous band trashed his drums during their performance and having two consecutive drummers behave in such a manner is just silly.

A short story Vincent wrote once earned him a cheese and wine movie party at Sony’s private screening room for him and fifty friends, which Sony executives no doubt regretted as free alcohol and bad movies don’t make for a civilized theater experience.

He currently lives in the mystical realm of Florida with his wife, Megan, and their small cat who thinks she’s in charge.