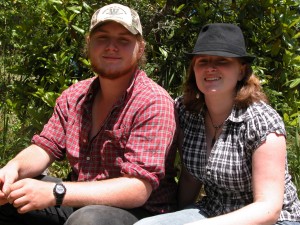 About Savannah and Zeke Parker

Savannah and Zeke Parker are a brother and sister writing team. They have been creating stories since they were very young, it wasn’t until about 2003 that they started writing their stories down. Billy Scarlet was not their first story, but somehow this story entangles itself with just about every other story they have written in one way or another.

They grew up in a large family and spent a lot of their childhood around the water. This story being one of the many that came from their time around the ocean. They live in Georgia on their family’s farm. Savannah is getting her associates degree in art while Zeke finishes high school. All the while both of them continue to learn more about and delve deeper into the worlds that they have brought to life through the written word.

Savannah and Zeke Parker have been writing together since they were 11 and 6 years old. The Secret of Nautilus Island was the first story they wrote together. The story began to develop when they would spend time around the ocean as children. Every time they would get the chance the two of them would be off to themselves spinning more tales about Tylar Morgan and Jonny Ford’s adventures at sea.


Their books at Ink Smith Publishing

The Secret of Nautilus Island

“I can feel it in the wind,” he whispered.
“What,” I asked. It always made the hair on my arms prickle when he talked like that.
“Twelve and fifteen,” He muttered. “That’s twenty seven.”
I nodded, but I was terribly confused as to what he meant.
“It’s about to begin.”
Young Billy Scarlet never knew what her life was about. She was the bastard child of a governor’s daughter and a pirate, but all through her child she felt that there was something more to who she was. Having been raised in an orphanage, by a stern head mistress and an old sailor toughen her up well enough, but it never prepared her for the adventure that awaited her.
After the man that raised her is killed, Billy and her friends Clara and Davy turn to a life at sea as ship’s boys, all the while hiding the fact that Billy and Clara are girls. After five years and what seems like a life time the two girls identities are discoverer and they are put off the ship. Their first night on land they meet a mysterious man named Shadowlark who seems to know the two of them better than they know themselves. He tells them of a life they once lived that neither of them can remember. They are soon thrust into an epic battle with an immortal sea captain named Nate Grayheart, who will stop at nothing to kill all three of them.