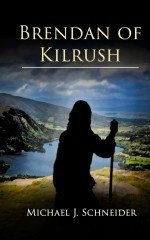 The year is 812 A.D. Vikings have invaded Ireland, burned and pillaged the village of Kilrush. Among their booty is Kaileen, a pretty 16-year-old colleen. Can Brendan, a lame teenage shepard boy, save her? In this Dark Age saga, Brendan and Kaileen, along with Brendans mute friend, Dungal, are relentlessly pursued by the vicious Norse barbarians across the Irish countryside and on the high seas. The trio seek the protection of King Finian, a powerful Irish monarch. His beautiful daughter, Failend, captures the hearts of both Brendan and Dungal. Brendan and Dungal, their friendship strained by the desire of each for Failend, soon learn that King Finian, as a protective parent, is to be feared more than the Vikings!