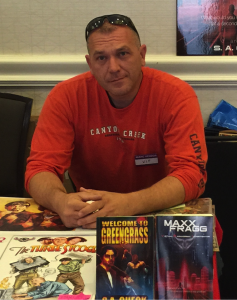 S.A. Check is a Science Fiction / Fantasy / Comic Book writer who grew up on a steady dose of sci-fi novels, comics, and anything that stretched the imagination. He earned his degree in English from Penn State University and lives with his E.R. nurse wife and tween daughter in Southwestern Pennsylvania, enjoying all the small dramas that come down the path. He’s a featured author on Science Fiction Fantasy Saturday, a writer for Bleeding Cool Magazine, has published short stories, such as Tangled Lines, for the charity anthology Hazard Yet Forward, and is currently writing for the ongoing comic book series The Three Stooges and Pink Panther from American Mythology comics, where he also has done editing and contributing work for other comics such as the ongoing Stargate Atlantis series. His first novel Welcome To GreenGrass, was released in 2013, being reviewed as “Men in Black meets interplanetary Columbo.”

“What are authors, but a nightlight to reality?” -S.A. Check

BOOKS BY THIS AUTHOR:

OTHER BOOKS BY THIS AUTHOR: