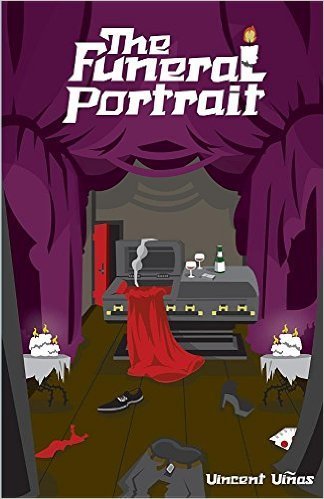 Guy doesn’t smile easily. He could be described as fundamentally glum.

Tallulah doesn’t die easily. She could be described as annoyingly immortal.

What if you wanted to die but were unable to? Such is the case with Guy Edwards and Tallulah Leigh, who want to end their miserable lives for different reasons. The only problem is, she’s been stricken with an unexplained (and unwelcome) case of immortality while he lacks that final, sorrowful piece of inspiration he needs to effectively do himself in.

What better way to solve this dilemma than to help kill each other. However, a bigger problem has emerged–one of them is falling in love with the other. They’ll now have to decide what is a more frightening option–dying or taking one last shot at happiness? The Funeral Portrait is a very dark and comedic (but often horrific) tale about two lost souls who find each other and soon realize the only thing that may be worse than death is commitment.